After leaving Alsace-Lorraine, Helmut Sinn came to the Palatinate as a refugee at the end of the First World War in 1918 with his family. In Alsace-Lorraine, he lived very close to an airfield on which French flight units were based.

He could see and hear the planes day and night. So his greatest wish was to become a pilot. As a young man, he registered as an aircraft candidate with the

armed forces and previously worked in the Palatinate. Finally, Helmut Sinn was called up in 1936. During his basic training he received a glider license from a civil glider club. At that time, you could still become a glider pilot without a teacher.

He was transferred to a reconnaissance unit in 1937 and fulfilled his dream of flying in a powered flight school in Quedlinburg. He flew mainly in France as an observer and scout on the English Channel.

In Russia, Helmut Sinn was injured in an emergency landing and had to be treated in a hospital in Clichy-la-Garenne northwest of Paris for a few months.

He was transferred to the blind flight school in Poznan, where he was trained as a blind flight instructor. There Helmut Sinn trained pilots for night and blind flight (instrument flight) on the JU 52, Ju 88, HE 111 and other aircraft. Helmut Sinn ended up in American captivity at the end of the war and was taken to the prisoner of war camp on Fehmarn. There he became seriously ill, when he was released, the war was finally over, but with him also the dream of flying.

After the war, Helmut Sinn faced nothing comparable. It was the time when he remembered another passion after flying: watches.

He married in Frankfurt and founded his first watch shop in 1953. But Helmut Sinn would not be the "quick Helmut" and would be good for change, because the ban on flying for Germans after World War II he tried a different passion than rally drivers. With a VW Beetle, he became class winner at the Algiers-Cape Town Rally after 18,000 km.

He had won the rally but had given up his business in Frankfurt. During his absence, he transferred his company "BASI" - for "Bader und Sinn" - to his wife and partner. Again he faced nothing and founded a new company "Sinn Spezialuhren Frankfurt am Main". In order not to compete with the then existing company "BASI", it was agreed that "Sinn Spezialuhren Frankfurt am Main" only offers instrument watches. He started making pilot's watches and called them rally watches because at that time aviation was still prohibited for Germans.

He found that the available built-in aircraft chronographs were several decades old. At that time there was only the Junghans watch, the J 30 BZ and some other old designs. He developed his first watch from the Valjoux caliber VJ 5 and at the end of the development there was his own caliber 58 with a central minute counter. The breakthrough came with a large order from the Air Force that was just being created.

Helmut Sinn sold his watches directly to the customer, thus avoiding the expensive trade surcharges. Without these surcharges, Helmut Sinn could remain true to his motto: "The best possible quality at the best price".

His original company Sinn Spezialuhren has had a new owner since 1994. As Germany's oldest young entrepreneur, he started again in 1998. Until 2014, Helmut Sinn developed concepts for functional watches with Jubilar watches, the Chronosport brand and the traditional Swiss Guinand brand.

“After the First World War, my family was expelled from Alsace. We lived near Speyer, and as a child I saw planes approaching the square there. "I wanted to be a pilot when I was six. Everyone laughed at the Kasper‘.

At the age of 18 I came to the labor service and already learned gliding there, I also flew with the famous 'skull splitter' on the Wasserkuppe. Then I came to the Air Force and acquired all pilot licenses from 1936 to 1938.

"The economic miracle began and I would have had to wait two years for a VW Beetle. I wanted to drive a Beetle in 1953 in the Algiers-Cape Town Rally, 14,000 kilometers. I drove straight to Wolfsburg. General Director Nordhoff thought I was crazy. But he gave me the car.

With a Porsche engine, I was class winner. I had enough money back then, I could afford it, and I drove many other races. At that time I was allowed to fly again, transferred planes from France to Germany, was one of the founders of the Egelsbach site, and was an aerobatic instructor. "

"I never trained as a watchmaker. I bought the movements in Switzerland and made my suggestions when ordering. I founded the factory in 1961. We assembled, tinkered and improved the parts. No frills, but solid quality at an affordable price.

600 of my Watches were screwed into the Lufthansa cockpits, I delivered clocks for Bell helicopters and tornadoes, and pilots, even astronauts, valued Sinn Watches on their wrist. Later, after selling Sinn with all the naming rights, I bought my old supplier Guinand. From 1995 to 2014 I was an entrepreneur again and it was still fun. "

“The time machine” with the cinematic portrait of Helmut Sinn. 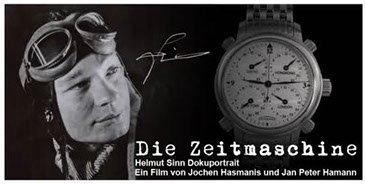 He had refrained from his passion to design wristwatches, but he remained true to his greatest passion.

He always dreamed of flying.

"One does not notice a great personality only when it is present; one often realizes its value even more when the place it occupied is empty."